Most cotton producers prefer lint-free, naked cotton planting seed. Lint-free seed can be more precisely metered through the cotton planter and generally lead to a more economical planting. Lint-free seed can be more precisely planted and grows much sooner (less than half the time required for fuzzy seed). Recognizing these benefits, it was necessary to explore the possibilities of developing an improved delinting system.

Up to date, methods employed throughout the world such as

Found to have many limitations and drawbacks such as high operation costs arising from inefficient use of first material highly specialized personnel, environmental pollution, damaging of seed etc.

This method was designed and developed in the laboratories of AGRO-INSUSTRIAL COTTON INC. in the U.S.A.

The primary objective was to produce naked seed of consistently high quality and solve the problems of environmental pollution.

The research was supported by the U.S. Dept. of Agriculture with funds made available through Cotton Inc. Following a series of experiments and research the aforementioned American company published its results. At the same time, however, it expressed certain reservations with regard to the practicality and performance levels of the method. After having studied the results and observations, EMKAT S.A. proceeded with its own research that led to the creation of a plant using this method. It is important to note that, following thorough technical specifications submitted on behalf of EMKAT S.A. regarding the innovative method of Chemical Delinting, the Hellenic Cotton Organization with its decision No. 14389/6.10.83 as well as the Agricultural Cooperative Unions of Levadia and Larissa (Greece) clearly showed their preference for this method and decided to entrust EMKAT S.A. with the construction of two plants.

Following the decision of the Hellenic Cotton Organization, the construction of two plants was entrusted to our company, which successfully carried out the projects in accordance with all the rules of art and science.

The result of these first constructions is now expressed in terms of high productivity, soundness of product and the fact that environmental pollution has been eliminated. This method is operated with very few personnel, is completely up-to-date (employing the very latest machinery), entirely harmless with a very small operating cost, does not cause water or air pollution, whilst the by-products are used for animal feed or fertilizer.

Today, EMKAT has constructed many Dilute sulphuric acid cotton planting seed delinting plants through the world. A great amount of knowledge has been acquired arising from the fact that in each project local conditions had to be met. Different acid concentrations available locally, different cotton seed varieties with various lint percentages, different tests performed for classifying the seed. Moreover EMKAT S.A. owns Dilute sulphuric acid Delinting plants which gives us a greater competitive advantage against any other manufacturers as we know the seed from the field to Ginning to Delinting and back and can continuously educate our customers for obtaining best results.

1984: GREEK ministry of Industry energy and technology awards ΕΜΚΑΤ patent with no: 87.0347 for the Technology of DILUTED SULPHURIC ACID CHEMICAL DELINTING FOR PLANTING COTTON SEED

1986: Technology of DILUTED SULPHURIC ACID CHEMICAL DELINTING FOR PLANTING COTTON is awarded in the United States of America New York with the technology award

1987: Technology of DILUTED SULPHURIC ACID CHEMICAL DELINTING FOR PLANTING COTTON is awarded in France Paris with the technology award from the European Union

1999: EMKAT establishes its first joint venture in the area of Surkhandarya in Uzbekistan

An international Tender was held in 1993, and CHEMICAL DELINTING PLANT was granted to EMKAT S.A. in collaboration with Marubeni Corporation of Japan. The cottonseed delinting factory in Khaneval was constructed and commissioned by EMKAT S.A. by the end of 1993 and, as it was recognized by the relevant parties in Pakistan, turned to be the only delinting factory in Pakistan that successfully produced high-quality product. Since that time the factory is continuously under operation.

EMKAT S.A. turned to be the first Greek company to open the Turkish market for Greek businesses in Turkey during the nineties EMKAT S.A. was contracted by one of the major cotton-producing cooperative societies in Turkey to construct a Chemical Delinting Cottonseed factory in the area of Söke, near Izmir. This factory started production on 09.03.1996, and since that time it has been steadily producing 7.000 to 8.000 tons of high quality naked cottonseed every year.

On behalf of the Egyptian Ministry of Agriculture, the public sector of Germany financed the project in the area ofand assigned it to ΕΜΚΑΤ S.A. The Diluted Sulphuric Acid Chemical Delinting plant of 4 tons/hour capacity for cottonseed production was completed in the beginning of 1997. The produced seed was and still is excellent; the quality as well as the cotton production has increased in the country. Kafr El Sheik

In addition to all others that are very well known, the seed planting rate was about 180 kg/hectare before the factory has been commenced, and with the seed produced by the factory, it is now only 25 kg/hectare.

Uzbekistan is known as one of the major cotton-producing countries in the world. EMKAT S.A. is present in the market of Uzbekistan and has been invited to participate in the implementation of the “Cotton Sub-sector Improvement” Program launched by the Uzbek Government jointly with the IBRD.

Following the construction of various delinting plants in many countries, based on ΕΜΚΑΤ’s technology and the suggested way of sowing, the results in production are clearly predictable; indicative pictures are shown below:

The accrued profit is such that in a very short period, to return all expenses made and pay the investors. For any case, the relative Agronomic Department of EMKAT S.A. is always at your service. 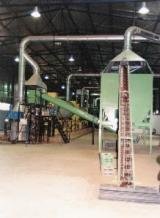